How Well Will Your Air Cleaning System Perform? Why You Need to Know About ASHRAE Standard 145.2 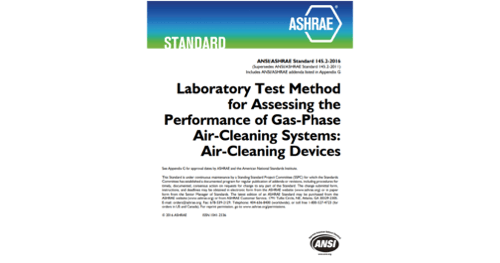 With the commercial building market focused on how to achieve good indoor air quality (IAQ) energy efficiently, a growing number of engineers are looking to use ASHRAE’s IAQ Procedure with air cleaning to improve ventilation energy efficiency. This is because the IAQ Procedure, unlike the alternative Ventilation Rate Procedure, allows for cleaned indoor air to offset a portion of the outside air requirement. In fact, recent field studies by the National Renewable Energy Lab (NREL) and Slipstream have shown that sorbent air cleaning technology can control indoor air contaminants with lower ventilation rates, which leads to energy savings without compromising IAQ.

When discussing the use of the IAQ Procedure and air cleaning with engineers, one of the common questions we get is how to determine the effectiveness of an air cleaning system at removing contaminants of concern from indoor air. This is a very important question because not all air cleaning systems are created equal. 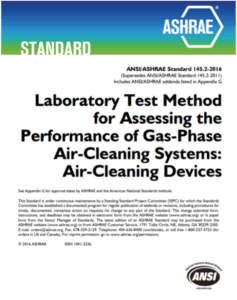 The good news for anyone looking to use a sorbent-based air cleaning system such as Sorbent Ventilation TechnologyTM is that ASHRAE has developed an industry-standard test procedure for these types of systems. The test procedure is called ASHRAE Standard 145.2 and the latest version was published in 2016.

Having a robust, industry-standard test procedure for all types of gas-phase air cleaning devices is critical because of the potential health impacts of certain gaseous contaminants found in all buildings. These contaminants include volatile organic compounds (VOCs) emitted from paints, wood preservatives, glues, cleansers, and office equipment. CO2, which is generated by people, is also a gaseous contaminant. Research has shown that lower levels of CO2 and VOCs like formaldehyde lead to higher student test scores and employee productivity gains. Ozone, a known carcinogen, is another gaseous contaminant that enters buildings by natural and mechanical ventilation and can be generated indoors by certain electrical devices. Breathing in ozone is like getting a sunburn on your lung tissue, and the EPA warns against using air cleaners that intentionally generate ozone in occupied spaces.

According to ASHRAE, Standard 145.2 “may be used to evaluate filters for use in a building designed and/or operated according to the ASHRAE Standard 62.1 IAQ Procedure.” In fact, using air cleaning performance based on Standard 145.2 is considered best practice when pursuing a performance-based IAQ design as evidenced by the fact that the U.S. Green Building Council requires that “contaminant removal efficiency must be based on a standard third-party test method for gas-phase air cleaning devices such as ASHRAE Standard 145.2….”

As a leading provider of sorbent-based air cleaning systems, enVerid’s Sorbent Ventilation Technology has undergone Standard 145.2 testing in independent third-party labs for the contaminants of concern identified in the latest ASHRAE 62.1 User’s Manual. enVerid’s test results are summarized in the following table. 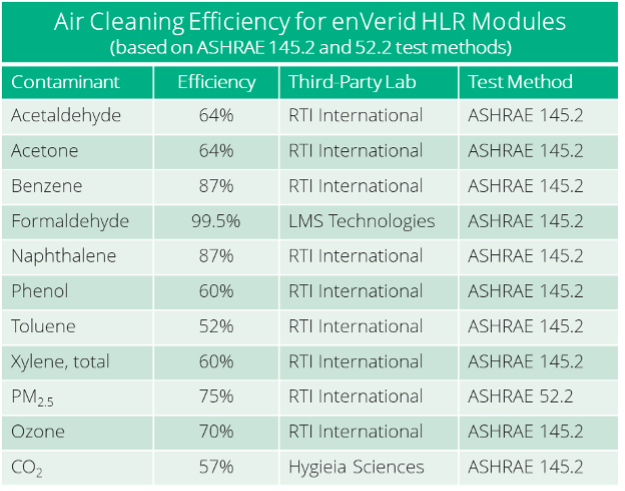 When performing IAQ Procedure calculations, we apply more conservative air cleaning efficiency assumptions based on the recommended sorbent filter replacement cycle, which is every two years. For example, 64% efficiency is typically used for formaldehyde rather than the 99.5% shown above to reflect our efficiency for formaldehyde after 24 months, based on third-party accelerated lifetime testing according to Standard 145.2.

It is also worth noting that RTI International has tested for VOC and ozone byproducts from our sorbent filters and found that our filters produce zero VOC or ozone byproducts.

The bottom line: If you are using ASHRAE’s IAQ Procedure with any type of gaseous air cleaning, you should only use air cleaning efficiencies based on third-party testing using nationally recognized standard test methods such as ASHRAE 145.2 for gas-phase air-cleaners and ASHRAE 52.2 for particle removal. You should also only use air cleaners that independent labs have confirmed do not produce any VOC or ozone byproducts. As stated on page 86 of ASHRAE 62.1-2019, “The current state of the science regarding the health effects of ozone strongly suggests that the use of air cleaners that emit ozone by design should not be permitted.”

[1] ASHRAE defines “sorptive media” as the active agent of the air cleaner, whether granular or sheet or pleated, that operate by absorbing and/or chemically reacting with contaminant gases. 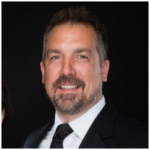 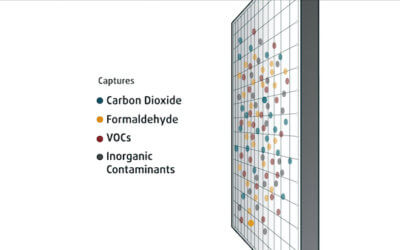 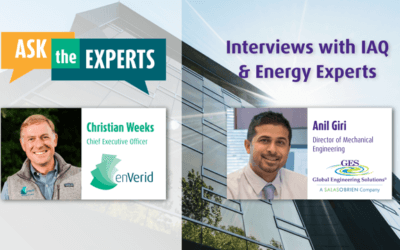 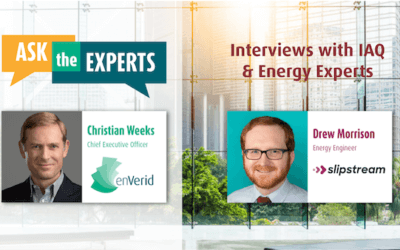 Ask the Experts with Drew Morrison of Slipstream